Attack on Titan: TV Series as a TV series - discussion

Attack on Titan is an anime television series adaptation of the manga of the same name. It was produced by Wit Studio (a subsidiary of IG Port) and first aired on MBS between April 6, 2013 and September 28, 2013. It is directed by Tetsurō Araki (Death Note) with Yūki Kaji starring as Eren, Yui Ishikawa voicing Mikasa and Marina Inoue as Armin. Both Funimation and Crunchyroll simulcast the series on their respective websites, and Funimation began releasing the series on North American home video in 2014. The anime has been licensed in the UK by Manga Entertainment. Madman Entertainment acquired the show for distribution in Australia and New Zealand. The final episode was also aired in Japanese theaters. It was the number 1 selling TV anime of 2013 in Japan. It was the number 1 streaming anime from Funimation in 2014. More: en.wikipedia.org.

It's such a fantastic series.

What immediately strikes us when we begin to watch this anime is how great the visual art is. The amount of detail in the scenery and animation in Attack on Titan is astounding. From the large-scale upper view of the buildings inside the walls to simple shots of the sky, you can sense the time and effort that was put in this piece of work. We usually get this kind of quality in spin-off movies, not in TV series.

You simply won't believe your eyes when you experience your first action scenes.

The crew involved in the anime not only had to make great art, they had to come up with something loyal to the manga and they also had to create an ambiance only a TV/movie series can come up with. They had to use the original vibe and build on it in order to push AoT to a whole new level. Well, they did it with brilliance. And now, this franchise is becoming titanic (heh) in terms of popularity.

The series is very well built. Each episode usually works with the same simple yet extremely effective formula: use 3/4 of the allowed time to build on the story and characters and then take the 1/4 left to feed the viewer with a culminating action scene that'll lead to a cliffhanger. And boy, the cliffhangers are so good. Keeping yourself from watching the next episode is torture.

The music also achieves its goal. So many great songs can be heard throughout this series. They come up just at the right moment to enhance the viewer's experience.

Now, I won't go too deep in the story itself because most people will discover Attack on Titan with the anime, but I have to dig a little in the whole storyline. It's a very, very dark anime. Whenever you think something good is going to happen, something terrible comes in the way and everything falls apart again and again and again. The series, just like the manga, bases itself on the concepts of revenge, hatred and despair. The characters face enemies that are far more powerful than them. It's a constant battle, not only against the Titans, but also within each character's mind. They often have to deal with the idea of resignation because the Titans are just so overwhelmingly powerful. Humans appear so weak and powerless, and they usually can only rely on their blades and other war equipment like the now famous 3D Maneuver Gear which allow them to go from one building to another much like Spider-Man. But when their tools fail, they rely on a fool's hope, and when hope fails, there's the survival instinct that kicks in for a short time before they too become a pray to the Titans. And the Titans are, to me, the most important element to the success of the series because of their apparent nonchalance. They eat people and walk away just like we do when we eat berries. They barely care if they are being attacked, which adds even more weight to the feeling of powerlessness that is always following the humans who fight them.

The series does a very good job at showing how difficult it is to be a leader and a soldier in times of war; the casualties of war, the rejection of one's feelings to overcome the inhuman cost of war, the questioning of one's mission and the questioning of a superior's ability to lead - and the leader's own guilt whenever something goes wrong for his subordinates, the "what ifs" which cause culpability, etc. are recurrent subjects. So yes, it's not just about huge monsters eating people, unlike what I previously thought. It's much more deeper than that.

Unlike most manga/anime, AoT does not seem to feel the need to have one-dimensional characters. Actually, many characters have a back-story and change over time to the point of becoming entirely different people by the end of the series' first season. Armin and Jean quickly come to mind - both characters I didn't like at first but ended up loving later on. Only one character seems out-of-place in this very dark world, in my opinion, and it's Sasha Blouse ( Sasha Braus ), "Potato Girl", a character who serves as the sole comic relief for the entire series, but I guess she also has her purpose, because not many characters can bring out the ordinary human beings in others. For example, Mikasa, one of the main characters, is a very silent character, so she needed Sasha to unearth part of her personality for us to appreciate her more.

The main character, Eren, was well-thought. Naruto was ( and still is ) a very popular anime/manga character. Naruto was popular in part due to its title character being who he is. Eren has this essence Naruto had despite their differences - the essense of a leading character. He has the same will to fight and vanquish enemies no matter what and how. I also believe Eren's character had a lot to do with the series' success. Eren remains different on many aspects, however. He is not funny like Naruto, and has a lot more anger inside him. Whenever Eren fights Titans, we can feel it. He often turns his anger and hatred into something positive, though, and that's what we like. When we know Eren's mad, we know the bad guys are gonna get it, and it makes us cheer for him.

The series ends with a relatively long story about a certain type of Titan. Near the end, you feel like they had difficulties filling up some space. Some scenes look like they were incorporated because they didn't know what to add in order to complete the 25 episodes formula. The last episodes sure are fun, don't get me wrong. The overall pace remains good and the first season does offer an interesting ending. I, of course, like most people, can't wait until season 2 comes out. 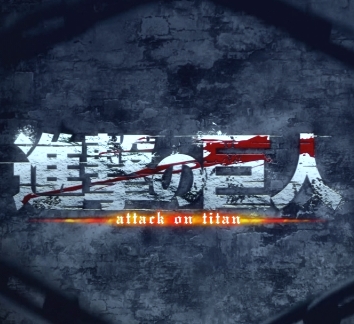 If you found a Death Note notebook, would you use it?
Who was the smartest Death Note character?
Should there be a sequel to Death Note?