Finn as a fictional character - discussion

Finn is a fictional character in the Star Wars universe played by John Boyega. He is a redeemed First Order stormtrooper. Boyega said that he learned he obtained the part "over a nice breakfast in Mayfair" where J. J. Abrams told him: "John, you're the new star of Star Wars." Boyega said: "When we find Finn, he's in incredible danger. And the way he reacts to this danger changes his life, and launches him into the Star Wars universe in a very unique way." More: en.wikipedia.org. 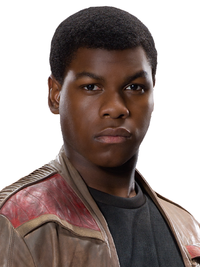