Palpatine as a fictional character - discussion

Though outwardly appearing to be a well-intentioned public servant and supporter of democracy prior to becoming Emperor, he is in fact Darth Sidious, the Dark Lord of the Sith – a cult of practitioners of the dark side of the Force previously thought to have been extinct in the galaxy for a millennium. As Sidious, he instigates the Clone Wars, all but destroys the Jedi, and transforms the Republic into the Empire. He also corrupts Anakin Skywalker to serve at his side as Darth Vader. Palpatine's reign comes to an end due to Luke Skywalker. More: en.wikipedia.org. 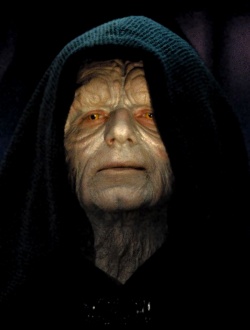