The Children of Húrin as a novel - discussion

The Children of Húrin

The Children of Húrin is an epic fantasy novel which forms the completion of a tale by J. R. R. Tolkien. He wrote the original version of the story in the late 1910s, revised it several times later, but did not complete it before his death in 1973. His son, Christopher Tolkien, edited the manuscripts to form a consistent narrative, and published it in 2007 as an independent work. More: en.wikipedia.org.

If you have finished The Hobbit and The Lord of the Rings, the two prime Tolkien works, and are hesitating on what to read next, I highly recommend this one before The Silmarillion.

Although the Silmarillion does offer a great read, the multiple stories it holds involve just so many names, places and ages. It can be confusing on your first time. Children of Húrin focuses on a single story. Its linear storytelling is much more similar to The Lord of the Rings'.

But Children is darker. There are no hobbits. We don't count the meals the characters eat on their journey. They don't sing together as they walk down the road. Gandalf isn't there to save the day, nor is Aragorn. Sauron is not even the main antagonist. He's there, but he's the #2, if not the #3 in the hierarchy of evil. Morgoth, the true master of everything that is corrupted, is the real bad guy this time. And this is, to me, the most interesting part of Children. Middle-earth is about to fall under Morgoth's power. Throughout Children, you are told on countless occasions how dire the situation is and how powerful Morgoth is. And you discover the extent - and limits - of this power. We are given a privileged look at the darker side of Middle-earth.

I must admit I always enjoyed it when Tolkien would write about the bad guys. Sauron. The balrog in the Moria. The orcs. They fascinate me.

The book starts with one of the biggest, most devastating battles in Middle-earth history, involving thousands of elves, men, dwarves, orcs, and even dragons and balrogs. It is brilliantly described. It turns out to be an extremely effective way of weaving the subsequent feeling of hopelessness and imminent doom the free people of Middle-earth have to deal with throughout the novel.

Elves are much more present than in Hobbit or LOTR since the story begins when they were at the peak of their glory. Once again, much like what I've described concerning Morgoth, we are introduced to a deeper understanding of the elves. In Lord of the Rings, the elves are extremely old and thus they have gained a lot of wisdom. In Children, they are still relatively young and are still prone to mischief. We learn that not all of them were necessarily good like Elrond, Legolas or Galadriel. Some were impetuous. Jealousy and even hatred would sometimes fuel their actions.

But men are still at the center of the story. Húrin, one of the bravest men who ever existed in this universe, defies Morgoth's authority in front of his troops. This leads an angry Morgoth, who hates men more than any other race, to curse him and his children. The whole story revolves around the various tragedies Húrin's son, Túrin, has to go through. Wherever Túrin goes, misfortune follows.

The book takes an even darker turn in the later chapters as Glaurung the dragon, sent by Morgoth, ravages everything on its path. Deep inside, Túrin knows his fate and the fate of those he loves lays in a final confrontation with the beast.

I have to talk about a fantastic visual artist, Alan Lee, who is well known by Tolkien fans already. He made some of the best Middle-earth artwork for this novel. And the art isn't too descriptive either, which leaves room for your imagination. Very impressive work.

I thought the Tolkien family was done with new releases. When Children of Húrin came out, I wasn't expecting much, to be honest. But in this one - and having read the original story in the Silmarillion - I think Christopher Tolkien decided to be more active in completing and editing his father's work. Most of the early posthumous Tolkien writings were given without much intervention from Christopher and he would rather leave a lot of annotations and explanations concerning this or that. This made the books hard to follow on occasions. I think he was afraid of altering his father's creations. I'm glad he wasn't afraid anymore because Children is one heck of a fantasy book. 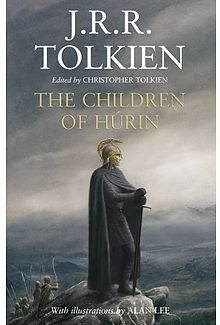 A Game of Thrones
Who are your favorite "main characters" in The Wheel of Time?
1
What are must-read books for fans of Harry Potter books?