The Good Dinosaur as a movie - discussion

The Good Dinosaur is a 2015 American 3D computer-animated adventure comedy-drama film produced by Pixar Animation Studios and released by Walt Disney Pictures. The film stars Raymond Ochoa, Jack Bright, Sam Elliott, Anna Paquin, A. J. Buckley, Jeffrey Wright, Frances McDormand, Marcus Scribner, Maleah Padilla, and Steve Zahn. Bob Peterson, who came up with the idea for the story, directed the film until August 2013. In October 2014, Peter Sohn was announced as the new director. The film, along with Inside Out, marks the first time that Pixar has released two feature films in the same year. The Good Dinosaur had its premiere on November 10, 2015 in Paris, and was released in the United States on November 25, 2015. More: en.wikipedia.org. 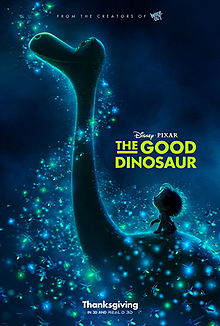