Borderlands: The Pre-Sequel! as an Xbox game - discussion

Borderlands: The Pre-Sequel! is a first-person shooter video game developed by 2K Australia, with assistance from Gearbox Software and published by 2K Games. It is the third game in the Borderlands series, and is a sequel-prequel to 2012's Borderlands 2. It was released for Microsoft Windows, OS X, Linux, PlayStation 3 and Xbox 360 on 14 October 2014. The rumored existence of the game was first reported on 7 April 2014, and it was officially announced two days later on 9 April 2014 for a release on 14 October 2014. PlayStation 4 and Xbox One ports were released as part of Borderlands: The Handsome Collection on 24 March 2015.

The storyline of The Pre-Sequel focuses on Handsome Jack (who would be the antagonist in Borderlands 2), an employee of the Hyperion corporation; after the company's Helios space station is captured by a military operation known as the Lost Legion, he leads a group of four playable characters—all of whom were NPCs and bosses in previous Borderlands games—on an expedition to re-gain control of Helios and defeat the Lost Legion. The game expands upon the engine and gameplay of Borderlands 2 and introduced new gameplay mechanics, including low-gravity environments, freeze weapons, and oxygen tanks, which are used to navigate and perform ground slamming attacks. More: en.wikipedia.org. 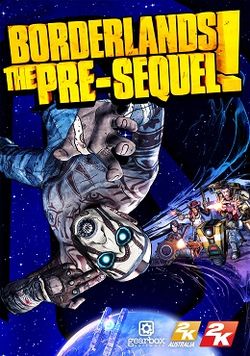