How can we act to fight the "superbugs" issue?

Some claim that "Superbugs will soon be a bigger problem than cancer".[source] How can we act and what laws do we need to prevent superbugs from growing?

For nearly a century, bacteria-fighting drugs known as antibiotics have helped to control and destroy many of the harmful bacteria that can make us sick. But in recent decades, antibiotics have been losing their punch against some types of bacteria. In fact, certain bacteria are now unbeatable with today’s medicines. Sadly, the way we’ve been using antibiotics is helping to create new drug-resistant “superbugs.”

Superbugs are strains of bacteria that are resistant to several types of antibiotics. Each year these drug-resistant bacteria infect more than 2 million people nationwide and kill at least 23,000, according to the U.S. Centers for Disease Control and Prevention (CDC). Drug-resistant forms of tuberculosis, gonorrhea, and staph infections are just a few of the dangers we now face.

Antibiotics are among the most commonly prescribed drugs for people. They’re also given to livestock to prevent disease and promote growth. Antibiotics are effective against bacterial infections, such as strep throat and some types of pneumonia, diarrheal diseases, and ear infections. But these drugs don’t work at all against viruses, such as those that cause colds or flu.

Unfortunately, many antibiotics prescribed to people and to animals are unnecessary. And the overuse and misuse of antibiotics helps to create drug-resistant bacteria. More: newsinhealth.nih.gov.

So if "antibiotics prescribed to people and to animals are unnecessary", and "the overuse and misuse of antibiotics helps to create drug-resistant bacteria", then would the solution not be to prescribe less antibiotics? I understand that this would bring some risk with it, but maybe a dietary adjustment is needed then (for humans and animals alike).

We need to have doctors who will say no to a patient who demands antibiotics for a cold when antibiotics do nothing to fight a cold virus. We may also need to use less hand sanitizer and antibacterial soap and instead use regular soap and our natural immune systems to fight everyday sorts of bacteria. We may also have to look for non-surgical means of treating ailments and eliminate cosmetic surgery except for reconstruction and repair purposes. Neither livestock nor people should be given antibiotics as a preemptive measure for a disease they may or may not contract.

We may also need to look into genetically altering bacteria. Many types of bacteria have a symbiotic relationship with our bodies. If we could somehow alter the harmful strains of bacteria to no longer harm us but instead actually contribute to our well being, perhaps we would no longer need antibiotics.

Ah, I see. I guess the answer could lie in the consumers' responsibility and (their awareness of) what is profitable for them. It seems in both cases (human and animal consumed by human) overuse of antibiotics is hazardous for the health. For example, processed meat contains (more) preservatives like N-nitroso and has been linked with chronic disease.[1][2] Once the consumer learns about what and how much is added to the meat (as opposed to other meats/alternatives), realising what the consequences are of regularly having to digest all of that, it might change its mind.

For doctors, it's the same. It's true that doctors, hospitals and/or health care insurance providers could make some profit out of prescribing certain drugs or procedures (simply because sometimes the only significant difference between drug x and drug y is the retail price). Ultimately it's the patient who gets to decide what is good for them. I suppose nowadays, health can be measured in a different way (e.g. 'feeling well' as opposed to 'being able/productive') but it's still a personal state.

Increasing the awareness of people is never a bad idea. I'm afraid it isn't enough in this case. Let's take tobacco for instance. There's this big "Smoking kills" caption on cigarette wrappings and for many people it still isn't effective. Now imagine how hard it would be to effectively stop people from buying processed meat, which is cheaper and it's not easy at all for an average person to check if the meat is processed or not. I'm sure we need something more than that, probably some strict laws.

Inceasing the awareness of doctors and patients will me more effective I guess, but will it be enough?

No, I don't think that it would be enough for the short term. But in my mind, pursuading people to eat animal-friendly meat (which tastes better and is traditionally considered to be a luxury product) or to not depend too much on medication (which usually has some bad side-effects) is easier than passing, upholding and enforcing (a) strict law(s) that for example prevents farmers to use some sort of "doping" (as I see it) for their meat production - not that laws aren't necessary.

The "Smoking kills" caption might have proven to be unuseful because it's more of a scare tactic, in my opinion almost of comedic proportions (still better than some dead scary commercials about it). People tend to need/prefer to be made aware of something (only) when they can do something about it, or when an alternative is presented with the warning. Otherwise, they just feel bothered and condescended by the government (not realizing the health risk of their choices). Increasing the price for tax purposes before those warnings wasn't that effective either, because it didn't help people off of their nicotine addiction. The most successful measure against smoking has been the national smoke-free legislation (it probably had more to do with fire safety than public health, although at least in the Netherlands such a law was passed to improve the working conditions of employees in the hospitality sector as they were consistently at risk)[1]. According to some researchers, there hasn't been enough compliance yet regarding this smoking ban, but a significant improvement for public health has been reported (source needed).

For the meat and/or drug industry it could be the same way (i.e. creating strict laws by agreement with public health instances and research). I suppose both approaches could work (top-down versus bottom-up). 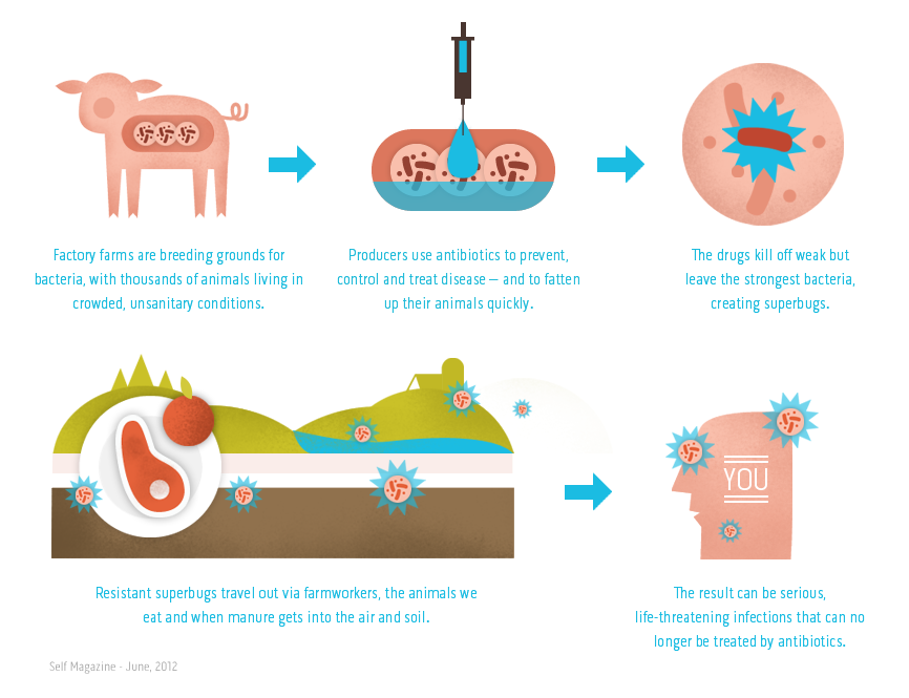 Antibiotics
+0
-0
Interesting
Share discussion:
more »
Edit
Flag
Info
Started by John Cees.
At: will superbugs kill us, superbugs spreading, stop superbugs, prevent superbugs, debate, forum.
Talks: 6.
See also:
1
How do you explain the placebo effect?
Has a doctor ever misdiagnosed you with a disease or medical condition?
1
Are you afraid of the Zika virus?
11
Should cigarettes be made illegal?
17
Should illegal drugs become decriminalized and controlled?
What should be the legal drinking age?
37
Should marijuana be legal?
5
Should alcohol be banned?
10
What should be the legal age to purchase alcohol?
Is smoking during pregnancy dangerous?

Should tobacco companies be required to include death or cancer warning messages on their products?
12
How would you like the drug regulation system to work?
2
Have you ever driven drunk or intoxicated?
8
Should carrying a firearm while intoxicated be legally allowed?
8
Is marijuana safer than alcohol?
12
What should be the legal age to purchase cigarettes (tobacco)?
15
Do you think legalization of marijuana will increase crime?
3
What do you think of research experiments of creating two-headed animals?
6
Are you confident your political or social beliefs you publicly share are right?
7
Was Hitler a good strategist?