Depression (called MDD; major depressive disorder) changes the way people see the world. Depressed people can't find happiness and joy in things other people can. But does depression alter reality? Or is it just another justified reality?

Long answer:
I see this is under the broad category of philosophy. Philosophy starts with an assumption, mine being that the universe I perceive around me is real (and even if I am a brain in a vat hooked to a computer that is running a simulation, I cannot absolutely determine that, so I might as well proceed as though it is real since the software is great and it is a lot of fun).

Science also begins with my assumption that the universe is real and that I can perceive it, but only in a limited sense. That being the case, observation and experimentation, both of which can be verified by others, are my best tools to evaluate the world.

This process occurs in our brain, a bag of neurons, chemicals, and electricity that responds both to the physical universe, our perception of it, and the effect that both have upon it. This includes the meanings we ascribe to different things we experience, be they people, things, words in a book, spoken words, etc. Genetics, physical trauma, emotional trauma, and the environment all have impact.

Depression has a physical cause in the brain that changes a person's perception of the world around them, but there is more to it than just balancing the chemicals in the brain. The entire body is involved, including the hormones, central and peripheral nervous systems, musculature, skin, and all our senses. The impact our experiences have is also a factor. Cases of depression vary from mild clinical depression to major depressive disorder, and only a trained professional can help assess the severity of depression and suggest a course of action. This is where philosophy and science meet, understanding that our perception of the world is based on factors than can be altered - that depression is not hopeless.
What Causes Depression - Harvard Health

All that to say this: Many people who have been successfully treated or remain under treatment for depression find that the world around them that used to seem so empty is now full of meaning and joy. It is the same world (perhaps with some personal changes when required) presenting the same opportunities, but despair has now been replaced with hope. The perception has changed.

The basic premise seems to be that while reality can't be proven to be true for lack of a real falsehood to compare it to, we can alter it in a way that other people can perceive, understand and measure to varying degrees. In other words, reality is at least a shared illusion, and at most the only field we humans have to ourselves.

Having defined reality (if you have a better definition that makes the following definition invalid or absurd, please share it), we can go back to the random questions asked earlier about what is "altering" reality. Simply put, i see altering reality as making a change on it which can be (but isn't necessarily) measured by others.

Now, what is depression? I believe OP said it well. Depression is a disorder which changes the way people see the world. In other words, depression changes our measurement of reality, not reality itself. From this point of view, i'd say no, depression can't actually change reality.

But this conclusion alone is quite naive, in that we are guided by our impulses to change reality, and depression attacks said impulses in a way that makes them behave erratically, often towards impulses of destructiveness. As such, depression alters the beings who alter reality, which is enough grounds to bring back again the question of whether it should be considered a reality-altering agent or not.

Let's try a third view. Do dreams alter reality? The oniric plane is often considered an alternate one from reality, yet we haven't found a (reliable) way to share it yet. Without the peer review of sorts that reality constantly undergoes, we can't call it true or real, but given that it gives us experiences that often leak in our waking world, we can't call it non-existent either. Lots of artistic movements have used their dreams as inspiration for real-life works, which should be enough justification to say that yes, dreams alter reality. Going with that logic, we have demonstrated that a non-true or unreal thing has altered reality, and knowing that the effects of depression are at least as strong if not stronger that the memories/emotions of a dream in our conscious self, we should be able to conclude that depression does alter reality, through us.

(Though if the question asked whether depression is an independent agent that can alter reality on its own, the answer is most likely no)

Finally, this grants us an additional point of view with which to follow up this discovery. If we claim that mental states such as depression have the power to alter reality, then other, smaller things like bodily itches or misrememberances can also do so. If that is so, then where do we draw the line? But i digress, the titular question i have already answered. I'd love to see some opposite points of view.

Teku, thank you for your opinion. I believe you have somewhat misunderstood, and that may have to do with honest semantic differences. In the second paragraph I noted that the question was under the category of “philosophy” and I addressed it as such. For the purposes of discourse, once we all agree on the assumption that we are living in a real, physical world, we may acknowledge that people see this world differently, though it is the same world.

You make the following statement, and I agree with it:
“Now, what is depression? I believe OP said it well. Depression is a disorder which changes the way people see the world.” I consider that statement the same as “Depression changes our perception of reality.”

You then add “In other words, depression changes our measurement of reality. . . .” and I agree with that.

But you continue after saying depression changes our measurement of reality bur “not reality itself. From this point of view, i'd say no, depression can't actually change reality.”

Our differences may hinge on how we interpret “changing reality.” Depression cannot change the warmth of a bright, sunny day, but it can change a person’s response to it, and that response can change a person’s actions. Instead of engaging with others outdoors or exercising, someone suffering from depression may choose to simply go home and do nothing, thereby contributing to the depression. In other words, depression changes a person’s behavior, and that behavior has a real effect in the real world. The point is, if a person’s perception of the world is tainted by depression, then the actions that follow have consequences in reality.

As another example, if a person is severely depressed, that person’s perception of their life may lead them to the conclusion that life is so bad, suicide is a real a alternative, and perhaps the only option to escape their pain. Should they end their life, their changed perception of the world has brought about real consequences.

However, with proper medical treatment, medication, and counseling the same person may soon reach the conclusion that life is worth living, even though the circumstances have not really changed. What has changed? Their perception, and the actions that follow.

I agree with what you said. Indeed, maybe our differences stem from different interpretations of "changing reality". As i said earlier "Simply put, i see altering reality as making a change on it which can be (but isn't necessarily) measured by others."

However, later on i say "we should be able to conclude that depression does alter reality, through us.". I'm sort of agreeing on the same thing you think, but i'd say depression doesn't effects/alters reality as much as it affects/influences it. The difference between an influence and an action is that the influence is a specific kind of action in which we don't do, but make someone/something else do in our stead.

So, finally, repeating what i said earlier, i'd say that depression doesn't alters reality, but it infuences its doers. A matter of semantics, really.

Depression changes the world view. When a person has depression, even just the stress, everything seems gray, depressing, bleak. 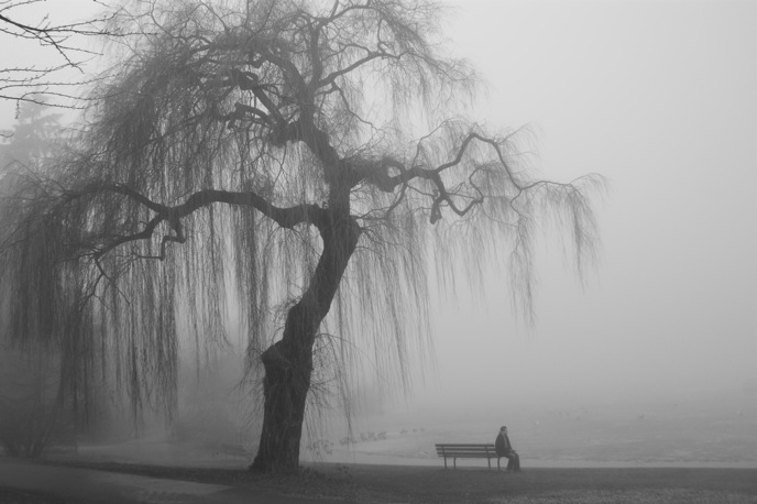 Do antidepressants make one's life usually better or usually worse?
1
Should depression be classified as a biochemical illness?
1
If you ever feel depressed, what time of a day you feel most vulnerable?
2
Do you think genius is linked with mental instability?
3
Do you think psychoterapy could help you improve your life?
1
What is ethical regarding a brilliant mind that is also unstable?
8
What can be done to prevent mentally ill people from hurting others?
2
Do you think Vladimir Putin may have autism?
1
What is better to preserve - mental stability or creativity?
Has a doctor ever misdiagnosed you with a disease or medical condition?
3
Would you say women or men are generally better people?
3
Would you sell one year of your life for million dollars?
5
Is it possible to disprove that the world was created 1 second ago?
3
Do you believe we have the freedom of speech?

Alan Watts
9
If you had to decide whether to bring the Universe into existence or not, what would you do?