Albert Arnold "Al" Gore, Jr. (born March 31, 1948) is an American politician and environmentalist who served as the 45th Vice President of the United States from 1993 to 2001 under President Bill Clinton. Chosen as Clinton's running mate in their successful 1992 campaign, he was reelected in 1996. At the end of Clinton's second term, Gore was the Democratic Party's nominee for President in 2000. In what was one of the closest presidential races in history, while Gore won the national popular vote, he lost the electoral vote, and thus the Presidency, to George W. Bush. After leaving office, Gore remained prominent as an author and environmental activist, whose work in climate change activism earned him the Nobel Peace Prize in 2007. More: en.wikipedia.org. 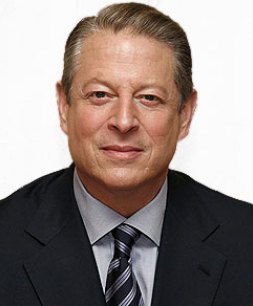