City as a novel - discussion

City is a 1952 science fiction fix-up novel by Clifford D. Simak. The original version consists of eight linked short stories, all originally published between 1944 and 1951, along with brief "notes" on each of the stories. These notes were created especially for the book, and serve as a bridging story of their own. The book was reprinted as ACE #D-283 in 1958, cover illustration by Ed Valigursky.

Simak published a ninth City tale in 1973 called "Epilog". A 1980 edition of City includes this ninth tale; some (but not all) subsequent editions of the book also include "Epilog". More: en.wikipedia.org. 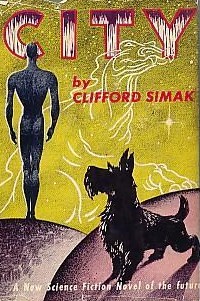