The Big Bang theory is the prevailing cosmological model for the universe from the earliest known periods through its subsequent large-scale evolution. It states that the universe was in a very high density state and then expanded. If the known laws of physics are extrapolated beyond where they are valid there is a singularity. Modern measurements place this moment at approximately 13.8 billion years ago, which is thus considered the age of the universe. After the initial expansion, the universe cooled sufficiently to allow the formation of subatomic particles, and later simple atoms. Giant clouds of these primordial elements later coalesced through gravity to form stars and galaxies. More: en.wikipedia.org.

Yes No see voting resultssaving...
0 opinions, 0 replies
Add your opinion:
Challenge someone to answer this topic:
Invite an OpiWiki user:
OR
Invite your friend via email:
@
click for template
x
OR
Share it:
Share this discussion via OpiWiki smartlink:
OR 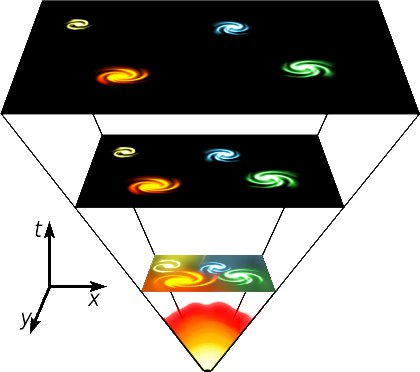 Is there some intelligent force behind the Universe?
5
Is it possible to disprove that the world was created 1 second ago?
What do you think is the meaning of life?
5
Was the world and life designed perfectly?
7
Is the Universe a result of an accident?
2
Did the Universe begin to exist, or has it been existing forever?
9
Do you think the Universe has a purpose?

Is there a scientific proof of evolution?
46
Is evolution a fact, theory, or fiction?