Dzhokhar Anzorovich "Jahar" Tsarnaev is one of the two Chechen brothers who planted bombs at the Boston Marathon on April 15, 2013. The bombings killed 3 people and injured as many as 264 others. [source] His brother, Tamerlan Anzorovich Tsarnaev, died on April 19, 2013 after being shot. [source]

Update: Dzhokhar Tsarnaev has been sentenced to death by lethal injection. [source]

I strongly believe that he deserves the needle. While many people would argue that the death penalty is inhumane and absolutely horrible, and etc. These people need to realize that he set off a bomb inside a marathon, killing a ton of people. Giving the death penalty to people like this sets the standard for the U.S. And MURICA! Also, if we don't give him the death penalty,it sets the standard for other criminals. While people would say that no one would commit crimes because they could get arrested; this doesn't do anything for criminals, they don't care if they get arrested or not. The entire reason people commit crimes is because it is again'st the law. The only thing that might stop mass bombing and murder is the fear of the death penalty. And, as someone also mentioned earlier, we are spending tax money to give the people in jail, food, living space, and even education. Did you guys know that while high school students can drop out at sixteen, inmates are required to learn and prisons are often required to offer a GED to all inmates. In fact, if you are even more interested in this topic, check out this video by BuzzFeed, youtube.com/watch?v=lOT3BvhjXcA It is really informative. But, please be sure to express your own opinion and please respond with it. Peace out!

Even if we view Tsarnaev as Satan incarnate, it is wrong to murder a helpless prisoner. It is wrong for governments to take lives without an immensely good and compelling cause.

But, in fact, Tsarnaev is a good example of how complex crime is. Was he a lifelong Jihadist who had spent thirty years involved in the movement? No. He was an angry kid, dragged along by his brother. He got radicalized. He made a horrible mistake, a grotesquely unethical action, and he deserves punishment. At what point does justice have mercy?

i think he should get the needle, if anyone deserves it it'd be him, he made the choice to set that bomb down right behind a young boy, and he can't take that back now, but the worst part about it is that he has no remorse at all!

I strongly oppose the death penalty for various reasons and it is no different in this instance. I think if murder is considered forbidden by the laws of this country, then killing a person in an instance not of self defense like with the death penalty, using state power and facilities no less, is inherently hypocritical and shows why the government should not be trusted. Also, I fail to see how this is productive at all. Shouldn't resources be put into figuring out why violence against civilians occurs in the first place. Including by the US government itself through drone strikes, instead of trying to get this phony form of "justice"? It is clearly an act of revenge to go to the death penalty more than anything and when logic and thought is used the emotional appeal of the act loses any worth it had.

OK, then people like you should volunteer to pay the horribly high cost of keeping him alive for the rest of his life which will likely be quite long. [Only child molesters get "justice" in prison].

Further... the death penalty needs to be abolished completely.

Any race of creatures calling itself civilized that puts people to death in spite of saying that people shouldn't kill people is badly "misaligned" and needs a refresher course on evolution, the reason we're here, and what is actually wrong with mankind's skewed outlook.

No I don't think so. I think we was prepared to die going into this ordeal. Keeping him alive might be a worse punishment (if that is what we should be striving for). I don't think the death penalty should be practiced, because there is no going back. You never know what new evidence could come out, in this case or in others.

True, but we have him caught red handed, even his lawyers admit he did it, he's on video setting the bomb on the ground, and he set it behind a defenseless child who'd never done anything to him good or bad, the only thing anyone in that crowd did that day was try to enjoy the end of the marathon. 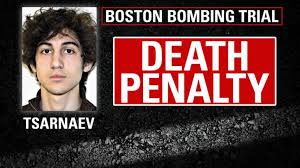 Add your opinion
Status:
Active
Views:
3,486
subscribe
For new opinion notification
Voting
(59 votes)
+1
-0
Interesting
Share discussion:
more »
Edit
Flag
Info
Started by Sir Lancelot.
At: dzhokhar, tsarnaev, death, penalty, boston, bombing, debate, forum.
Talks: 8.
---
See also:
12
Are there people who deserve to die?
5
If someone sexually abused and murdered your child, what penalty would you want them to receive?
21
Study: 1 in 25 death cases likely innocent – Do you still support the death penalty?
15
Would you kill baby Adolf Hitler?
22
Should the death penalty be allowed?
15
Do you think legalization of marijuana will increase crime?
2
H.R.3134 - Defund Planned Parenthood Act of 2015
7
Should Hillary Clinton face tampering with evidence charges for erasing her servers after Trey Gowdy sought a subpoena to retrieve e-mails related to official Government business?
7
Should prison sentences for low-level drug offenders be shortened?
21
Would ban on guns reduce homicide attempt rate?
11
City Crime: What are your ideas to lower city crime?
17
Should illegal drugs become decriminalized and controlled?
9
Would crime rate decrease if the media decreased reporting bad news?
3
Is online piracy a victimless crime?
3
If it is proven in a court of law, should Planned Parenthood be defunded by the federal government for illegally selling aborted fetuses' organs and tissue?
3
How do you feel about police arresting people over jaywalking?
25
Study: More guns equal more deaths
3
Do you approve of the UK and the US sending ground troops back into Iraq to fight ISIS?
5
H.R.3361 - USA FREEDOM Act
8
If you were a Muslim, would you be ashamed to belong to the same religion as Muslim terrorists?