Sven Magnus Øen Carlsen (born 30 November 1990) is a Norwegian chess grandmaster, No. 1 ranked player in the world and reigning World Chess Champion in classical, rapid and blitz. His peak rating is 2882, the highest in history.

A chess prodigy, Carlsen became a Grandmaster in 2004, at the age of 13 years, 148 days, making him at that time the second youngest grandmaster in history, although he has since become the third youngest. On 1 January 2010, at the age of 19 years, 32 days, he became the youngest chess player in history to be ranked world No. 1. In November 2013, Carlsen defeated Viswanathan Anand in the World Chess Championship 2013, thus becoming the new world chess champion. On the May 2014 FIDE rating list, Carlsen reached his top Elo rating of 2882, the highest in history. He successfully defended his title in November 2014, once again defeating Anand. More: en.wikipedia.org. 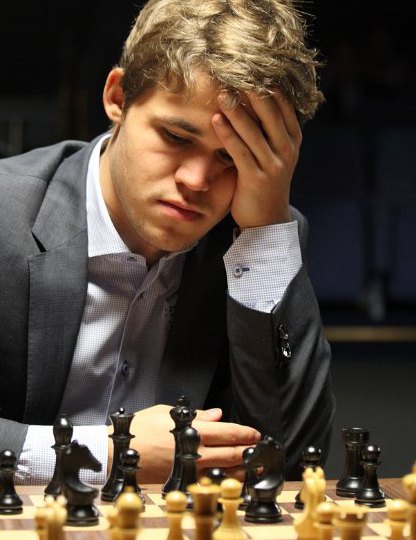 Chris Ward
8
Will women ever be as good as men at mind sports?

Garry Kasparov
How strong do you think Kasparov could be if he returned to chess now, at the age of 52?